This is a message I would like to try and get across social point and I'm pretty sure a lot of you will agree with me on this matter. The fact is there is more monsters than space, I I will be addressing this a little later. And although I like the new mystics, they are way too over Powered! I first started playing this game years ago on desktop and I thoroughly enjoyed it, before all the microtransactions it was a fun and challenging game to play. The shift to mobile it was inevitable, but but that's when things took a nosedive. Any new people coming into this game will find their first legendaries (vadamagma, arch night etc) absolutely useless against not only the mythics but some of the more recently high-powered legends. Unless they are willing to spend money goregrind feverishly they aren't going to have a chance especially in team wars. And now my main problem... and I know for a fact I'm not the only one! For the last 2 years players have been requesting more Ireland space and also more in the adventure map. The monster vault would be beneficial if it allow our monsters to generate gold! But given the fact you are turning 3,4 even 5 mythics out a month AND the mythic habitats being bigger than the legendary ones! We have nowhere to put them! Eventually, people will stop paying for monsters they can't fit in their game.
What I'm trying to say socialpoint, address the issues that your fans have been calling out for for the last 2 years and not give us one Ireland that we have to pay for for the sake of a few gems and a bit of space. I have a few suggestions:
1- have two different areas for Islands, maybe set up a portal instead of the monster vault, a portal that leads you to another group of islands!
2-take a small break from designing new monsters and create new Islands. there's over 700 of these things to try and get and I've been playing the game for years and only just over halfway.
3- the earlier monsters we all collected first seem to have slipped to the bottom of the pile yet forever remain on your loading screens and even on this forum. Maybe create a new temple that allows "only the earlier monsters and legendaries" that we first caught to be buffed up to match the strength of some of the new ones.
And finally, this is just a complete personal request of my own, the ability to create a custom monster (from templates obviously) and depending on type fixed movesets that we can choose from. This would give every single player their own chance to create a unique monster that is personal to them. I apologise for this long-winded message, but if any of us p have taken the time to read through this then I appreciate it and I hope what I have said has given you food for thought. But if you are going to take anything away from this message please let it be that your fan base and your players are screaming for more space.
Many thanks, Rob

The star of the Freak Circus, Hercule, seemed to be fading away. Everyone knows his one-man show of weight lifting and opera singing by heart and he’s having trouble finding new ways to impress the audience. He tried changing La Traviata for The Barber of Seville, but after that, he was pretty much out of ideas.

It got to the point where he had to admit he couldn’t carry the entire show on his own shoulders, so he started looking for new stars. You’d think that in the universe of Monster Legends it would be easy to find extraordinary freaks of nature, but Hercule was looking for something very specific… and he finally found it. Her name was Siamiss, a two-headed monster, created from a faulty piece of Amber. The right head can spit snakes, it’s a dangerous one! However, the left head is an excellent poet. From the moment he saw her, Hercule knew he absolutely needed Siamiss in the show. 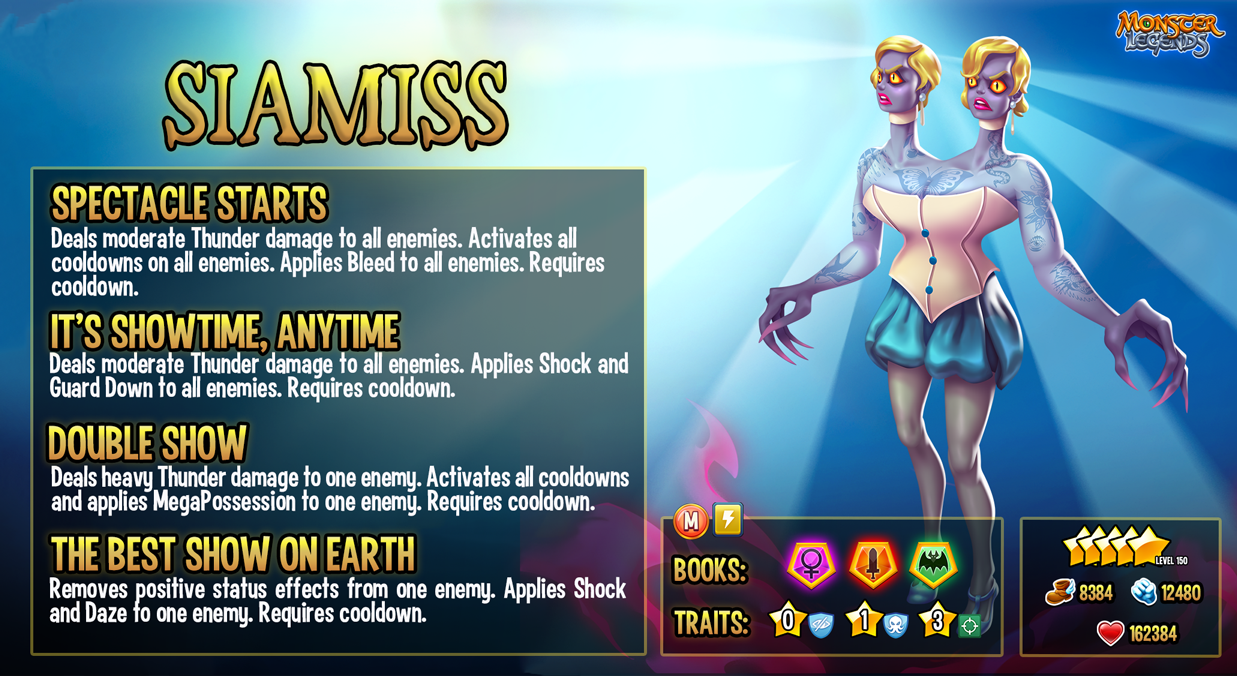 Siamiss is a Thunder Controller with Cooldown Activations. She can apply the cooldowns of all enemies and make them Bleed in one move or apply Guard Down and Shock to them with another move. Her single-target moves are powerful too: She can remove the positive effects of an enemy and apply Shock and daze to it, or activate its cooldowns and apply MegaPossession to it. Siamiss has an Evolving Trait: at rank 0, she's Immune to Blind, at rank 1, she becomes an Abomination and, at rank 3, she gains Precision at the start of every battle. 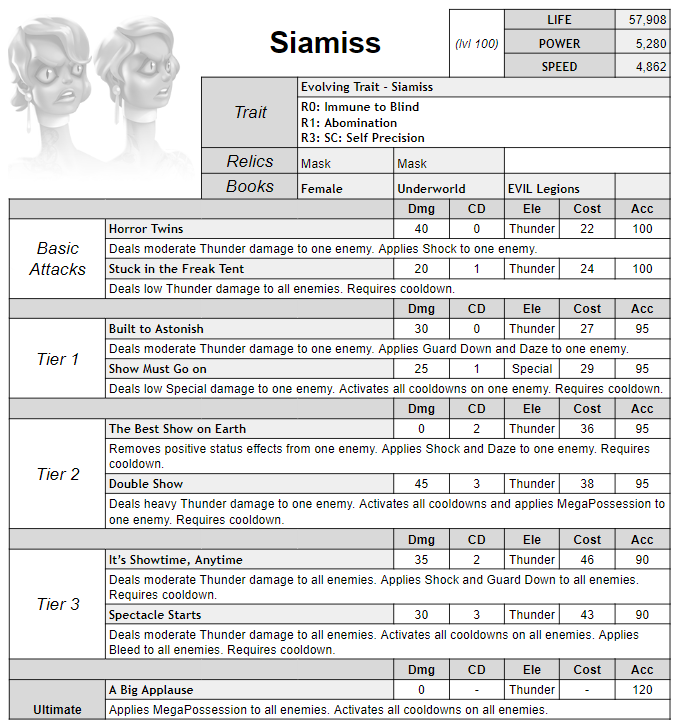 Meet the new star of Hercule's Freak Circus! Her name is Siamiss and she's a truly extraordinary monster! The right head can spit snakes, it's a dangerous one! However, the left head is an excellent poet. From the moment he saw her, Hercule knew he absolutely needed Siamiss on the show.

Siamiss is an outstanding Thunder denier. She is easily the best Mythic denier and has access to both CDA and Mega Possession for denial. Her trait is pretty nice, with Abomination and Precision, which helps her land her total of five negative effects. These are the aforementioned Mega Possession, Shock, Bleed, Guard Down and Daze. Most Mythic deniers don't have PER to help deny now, but that isn't the case with Siamiss! There is one thing that holds her back, though, which is her moderate stamina costs and cooldowns.

How many wikileaks documents released